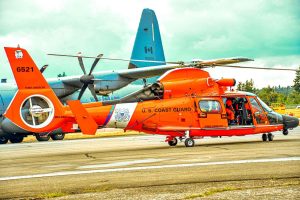 On August 4th, the nation celebrates National Coast Guard Day in recognition of the numerous accomplishments of this distinguished branch of our military since it was founded on August 4, 1790.

According to historical accounts, the founding of our Coast Guard can be traced back when Alexander Hamilton, the then Secretary of Treasury, approved the construction of 10 ships known as Revenue Cutters to enforce the U.S. tariff laws.

The Coast Guard performs a wide range of maritime duties, including the campaign against drug smuggling, port and waterway security, search and rescue missions, marine environmental protection, law enforcement, and icebreaking operations among others.

Thanks to the 45,000 brave men and women who are serving in the Coast Guard, we can rest easy knowing that the country’s borders are well protected.

5 Facts About the U.S. Coast Guard That May Surprise You

As the nation pays tribute to the men and women of our Coast Guard, Veteran Car Donations has pulled together these five surprising facts about this military branch.

If you think that deployment is limited to the Marines and Army troops, think again. Coast guards are also deployed to various locations several times during their service.

DOG, or Deployable Operations Group, is a Coast Guard team that specifically handles counter-terrorism and high-threat situations. These include maritime interdiction, nuclear-biological-chemical threats, anti-piracy, anti-terrorism, and counter-terrorism. Since the Coast Guard is not under the Department of Defense during peacetime, it did not have a special force for these types of situations. As a result, it created DOG.

Even though the Coast Guard works separately from the Department of Defense, this military branch boasts of a long and distinguished history of service. Its unique capabilities in pursuit of its maritime duties have contributed immensely to our country’s well-being for over 200 years. It needs to be underscored that the Coast Guard served in all of America’s wars.

Coast Guard members manage to save an average of 4,000 lives as they handle an estimated 20,000 search and rescue missions every year.

Show Your Support to the Vets in Your Area

If you want to lend a helping hand to the struggling former service members residing in your area, Coast Guard Day on August 4th is an opportune time to do just that. You’ll be able to uplift the lives of our veterans by simply donating a vehicle you no longer need to Veteran Car Donations.

We’ll sell your vehicle through an auction and distribute the proceeds to our military and veteran nonprofit partners that are dedicated to promoting the welfare of our nation’s heroes.

Thanks to your donation, much-needed aid will be given to veterans who are suffering from joblessness, service-connected disabilities, and illnesses, including mental health issues, as well as homeless due to utter poverty. Our nonprofit partners will be able to provide them with quality health care, financial aid, housing assistance, employment opportunities, family support, educational scholarships, psychotherapy services, and many other benefits.

You will also get your share of benefits from your auto donation. These include a substantial tax deduction and the free towing of your car wherever you are in the country.

You can donate almost any type of vehicle  whether it’s still in tip-top shape or needs a lot of work.

To learn more about our work, feel free to visit our FAQs page. Should you have any questions or concerns, you may reach us at our toll-free hotline 877-594-5822 or send us a message here.

Let Them See Light at the End of the Tunnel Today!

On Coast Guard Day this August 4th, let our suffering heroes see a bright light at the end of the tunnel they’re in. Use this day to make an impact on their lives, Donate to us by calling 877-594-5822 or filling out our online donation form now!