Honor the Men and Women of Our Military on May 15th 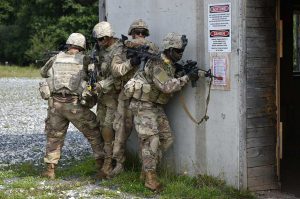 Every third Saturday in May, the nation celebrates Armed Forces Day as we pay tribute to the men and women who currently serve in all of the United States armed forces. It’s a holiday devoted to expressing our appreciation for the service and patriotism of our troops.

This year, the holiday falls on May 15th, right in the middle of Military Appreciation Month, which begins on May 1st with Loyalty Day. The month includes Military Spouse Appreciation Day (May 7th) and VE (Victory in Europe) Day (May 8th). It concludes with Memorial Day (May 31st), a day to honor our fallen heroes.

Armed Forces Day was created during the administration of President Harry S. Truman in 1949. The holiday was meant to replace separate Army, Navy, and Air Force Days following the armed forces’ unification under one department, the Department of Defense. President John F. Kennedy officially declared the holiday in 1962.

Things You Need to Know About Our Armed Forces

The United States Armed Forces comprise six branches — the Army, Marine Corps, Navy, Air Force, Space Force, and Coast Guard. With over 1.8 million active-duty soldiers, our armed forces are our country’s biggest employer. Troops are stationed across America and in 737 overseas installations in the world.

Here are some interesting facts about our military:

While this year’s Armed Forces Day may not include large public gatherings like parades or air shows due to the pandemic, there are numerous ways you and your family can celebrate it. Here are some suggestions to get kids of all ages involved.

Have a military-themed movie binge party at home with your family as you watch some of these films: Saving Private Ryan, We Were Soldiers, Black Hawk Down, Behind Enemy Lines, Thin Red Line, and Full Metal Jacket. With plenty of available choices on streaming platforms, you won’t run out of options.

If you live near a military memorial or cemetery, pay your respects to our fallen heroes by lighting a candle or leaving flowers on their graves.

Connect with a local hero and invite others to an online discussion to promote awareness about the work of our armed forces. Share your stories to a wider audience by making them available online.

Promote the Welfare of Our Veterans

The best way to celebrate Armed Forces Day is to promote the welfare of our troops even after they leave the service. All across America, thousands of veterans are suffering from homelessness, lack of job opportunities, disabilities, and illnesses, including mental health disorders as they reel from the challenges of transitioning to civilian life.

The good news is that you can do something to help these suffering men and women who are considered our nation’s heroes. All you have to do is donate your extra or unwanted vehicle to us at Veteran Car Donations. By auctioning it off, we’ll be able to convert it into a fund-generating tool for leading veteran and military nonprofit organizations that are in partnership with us.

The proceeds from the sale of your donated vehicle will help support the vital programs and services being delivered by these IRS-certified 501(c)(3) nonprofits. Thanks to your donation, they will be able to provide more deserving veterans and their families with free quality health care, financial aid, housing assistance, employment opportunities, family support, educational scholarships, psychotherapy services, and many other benefits.

As our donor, you’ll get to receive the maximum tax deduction. You’ll also receive free pickup and towing service from us wherever you’re residing in the country.

The best reward you’ll get, however, is the priceless feeling of joy and satisfaction for helping uplift the lives of our nation’s heroes.

We take almost all types of vehicles, including those that barely run anymore.

If you want to learn more about our vehicle donation program, feel free to visit our FAQs page. For inquiries or concerns, call us at 877-594-5822 or contact us here.

Uplift the Lives of Our Struggling Heroes Today!

Give the suffering veterans in your community a shot at achieving the decent life they deserve. Your car donation will go a long way toward achieving such a purpose. Call Veteran Car Donations at 877-594-5822 or fill out our online donation form now!