Women and the Military: Then and Now

When people talk about the American military, the image that often comes to their minds is a strong and hyper-masculine soldier who freely lays down his life in the service of our country. However, did you know that ever since the United States transitioned from the draft for military service in 1973 into the all-volunteer force that we know today, women have been making up an increasingly larger percentage of our armed forces personnel?

If we take a moment to look back on the history of the American military, you may be surprised to find out that a long line of women fought bravely to preserve all that our country stands for. Unfortunately, their important contributions seem underappreciated.

Today, Veteran Car Donations sheds light on the servicewomen who abandoned their traditional roles as cooks or seamstresses to serve in every conflict alongside men from the American Revolution to the present.  Check out the women and the military: then and now.

Women in the Military Before

Most of the women who first served in the military were the wives, mothers, and daughters of the men who fought in the battle. They supported their fighting men by cooking their meals, carrying their water, mending and washing their clothes, and treating their wounds. Needless to say, their contributions enabled the men to stay healthy as they fought on the frontlines.

Although women weren’t allowed to join the military at that time, two exceptional women defied the rules and went the extra mile in terms of service. One of them was Margaret Corbin of Philadelphia who, upon seeing her husband’s unmanned cannon minutes after he died in combat, continued loading and firing until she was wounded herself. Another was Deborah Sampson who disguised herself as a man under the alias Robert Shurtliff and fought as a soldier in the Continental Army in New York until her true identity was discovered.

During the American Civil War, women were placed in harm’s way as they were positioned closer to the front lines in the battlefield hospitals. One of the women who distinguished herself at that time was Dr. Mary Walker, the United States Army’s first female surgeon.

Before she was captured by the Confederacy and became a prisoner of war, she crossed enemy lines to help treat injured civilians. For her exemplary acts of bravery, she became the only woman to receive the Congressional Medal of Honor.

When the U.S. government recognized and acknowledged the pivotal roles that women played during the previous wars, the Army became open to women on an official level. More than 30,000 women enlisted. With this, the military leaders began considering the possibility of a woman’s career path in the U.S. armed forces

Since World War II was a conflict on a global scale, there was an urgency to mobilize the entire U.S. population. This led to the expansion of women’s roles in the military. Many of them enlisted and were trained as pilots, mechanics, and drivers in addition to their traditional positions.

It was during this time when the Women’s Armed Services Integration Act was passed during President Harry Truman’s term, allowing women to be recognized as full members of the American military with the same benefits and responsibilities as those of men.

Both wars saw millions of women in Marine, Air Force, Army, and Navy uniforms. Many of them also served as nurses during those wars. After the Vietnam War, American women began to fight for equality in the educational institutions, workplaces, and in the political arena, leading to the creation of the women’s rights movement.

Meanwhile, in the military, women were allowed into service academies, granting them access to the Corps of Cadets. For the first time, they became qualified to hold positions of military leadership and authority.

During the first Gulf War in 1991, women performed combat missions aboard warships and warplanes from U.S. aircraft carriers. However, in 1994, they suffered a setback when they were prohibited from serving in units handling ground combat.

Today, all military positions are now opened to women, allowing them to advance into the military’s highest ranks. We’ve come a long way since women disguised themselves as men to serve in combat.  Seeing the evolution of the roles that women play in the military allows us to recognize their importance in the development of our country’s history.

How You Can Show Your Gratitude 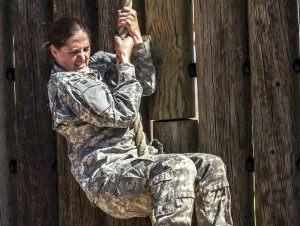 One of the best ways you can show your appreciation and gratitude for everything that our former military servicewomen have contributed to our nation is by donating any type of vehicle to Veteran Car Donations. We will auction off your donated vehicle and use the proceeds to support the programs of our nonprofit partners that have committed themselves to help veterans who are saddled with service-connected disabilities, physical and mental health issues, lack of jobs, and homelessness due to poverty.

While your vehicle donation will directly impact the lives of our veterans, you will also benefit since your charitable contribution will entitle you to a top tax deduction after your vehicle is sold at auction.

If you want to know more about how your vehicle donation can impact the lives of our nation’s heroes, check out our FAQs page. For inquiries, you can call us at 877-594-5822 or send us a message online.

You can donate to Veteran Car Donations by filling out our secure online donation form. We accept donations wherever you are in the United States since we have car donation programs in all 50 states.

Uplift Our Heroes’ Lives with Your Car Donation!

If you’re ready to show your appreciation and gratitude to our veterans, including those women who did their part in ensuring our freedom and security, call us at 877-594-5822 today. Uplift the lives of nation’s struggling heroes with your car donation!